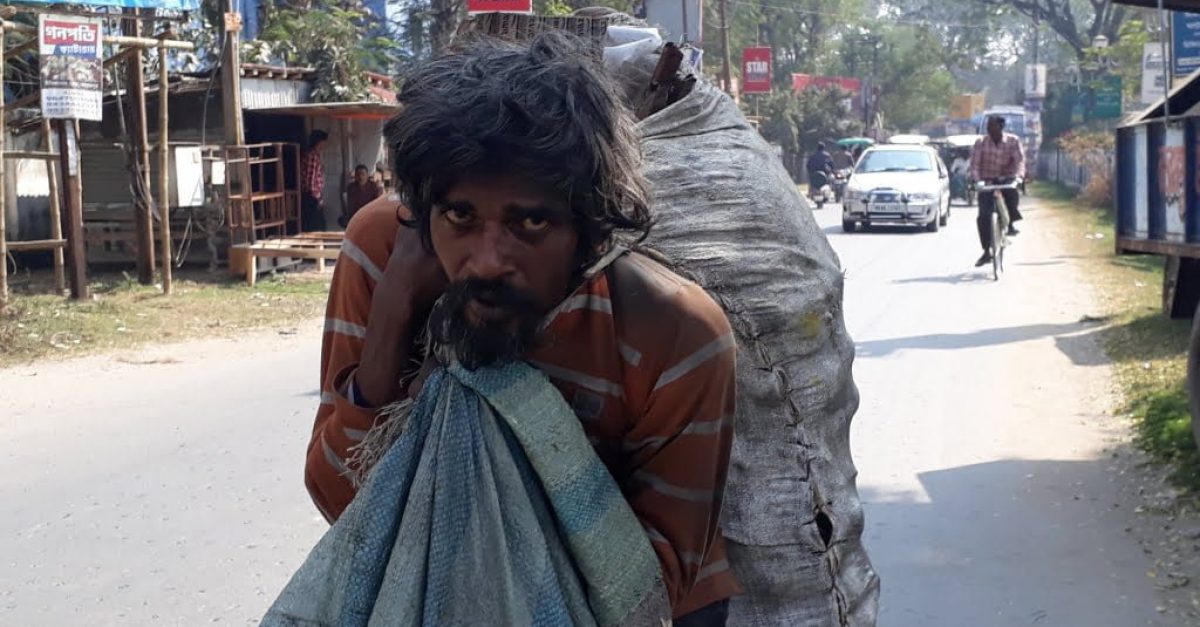 I live in a district town. My forefathers were all peasants and died in remote villages. I’m a farmer’ son. Read some books and have become a lecturer and for a life of a “Wow” came to a moffusil town. The wow bursts.

Soon my legs touched the street I saw rows of tuk tuk drivers on both sides of the street. The drivers, pale dry faces, smoked biris and eagerly waiting for babus of the holes. The babus dressed in fine clothes hired them for a paltry sum of Rs. 10. The rickshaws all vanished from the scene, and the pullers by overnight became jobless. The elders died or stayed in shanties. The younger pullers either made way to Bangalore or Kerala, or mortgaged wife’s meagre gold and bought the tuk tuk. Among them muscle and party powers ruled strong. Urban drivers enjoyed both while the drivers from outskirts of hole were often bullied and abused as ‘geyo voot ‘ and other offensives. Skirmishes and hot altercations regularly ruled their lives. The city babus are all dumb spectators.

I saw traffic police taking a bribe of even Rs.10 from hay vans and trucks at broad daylight. I thought what wonderful service they provided to society. Potbellied police need to punished for their self service. They had no moral, no integrity, lest honour. They sold them @Rs 10. How could we expect help from them. Their moral was too low. But police is an example. Such rot grasped the entire society. Men don’t think twice to do the most heinous crime…selling the self for nothing. I saw great post holders behaving like cockerels. Why did such men live? Only for serving the rotten putrid ugly soiled self .Why did not they commit suicide? Why did they live a cheap life of rats and cats and jackals? Why not of lions and tigers. The answer. Because we, the self servers saw no light from womb to tomb, and were happy to live a life in hole, darkened forever.

My pigeon hole is circled by many other pigeon holes. I often saw a lanky boy, aged nine or ten hurrying and scurrying in one of the the holes alone. Parents were all busy. The boy often peeped out of the window wistfully, saw the tree tops tossing their heads, birds fleeted from one twig to other, and perched on a clothes line on some rooftops. Sometimes he came all alone on the roof and tried to play badminton and cricket, but no playmates were there. He found no joy, and he was dull. Now the mother called him for tuitions. Teachers came and went whole weeks and months and years. The boy was puzzled. Every guardians of holes worked hard to make his child “first” in anything and everything. The boy was tired and pale, enslaved by the parents’ great expectations. They were in hole, and doing everything possible for buying another hole for their little darling, and killed his childhood mute and silent.

The air is full of dust and smoke. Vehicles pass and belch out smoke, and the men on the street are covered with soot. The hole people most gratiously inhale it and become paradisically happy. The waterbodies being filled and highrisers rise to the sky. The bellies of the cheaters and the officials bulge out. They buy expensive cars and jam the lanes, and sound deafening horns nonstop. People on the lanes look at glossy cars and mutter and abuse. More vehicles sold, more India shines. And the ease of doing business becomes really successful. The traffic is so much heavy that a man cannot pass from one side to the opposite. The street is a nightmare. The children and the elders can never imagine to use it without the assistance of the well and the sturdy. It’s not the life line. It’s a death line. People hurry and scurry, and jostle and tussle and bustle. Like robots they withstand the vagaries of being holed.

Visit a doctor, and see the crowd of young polished MRs. The hole of the doctor is all nuisance . A patient can wait for hours, but MRs cannot. The nexus is too apparent. Nobody has the ability to protest. While the suited booted mrs move in and out of the hole, critical patients sit and sigh. Moreover, the highhandedness and rudeness of petty managerial dalals is simply intolerable. The disease is cured without medication. The chemo of such extraneous torturers (MRs and dalals) cures the patient. For a mere bellyache, headache, or a simple viral fever, the patient has to go at least 4 or more unnecessary tests besides buying a bag of many colourful tablets, syrups. People mutter that doctors have been butchers. The networking among the doctors, mrs, pathology and diagnostic centres, medicine stores is strong. And none dare to protest against such unethical practices, going on at tendem from ages. The hole is too lucrative to be resisted.

The hole’s health deteriorated because of sound pollution. From the deafening horns of the everyday vehicles to the festive and political pandemonium by all sorts of social workers created malignant tumours to the body of the hell. Every now and then a rally with blaring mikes assisted by self serving social workers passed through the hole. The traffic stopped for hours. Police were dumb spectators. And good law abiding citizens of the holes clamoured and abused. Abusers all I knew, but the abused I didn’t. The school children during such circuses played among the boxes. Ambulances horned unending and tried hard to squeeze past the line of noble social workers. Of late, a new nuisance in the name of bike rally added a new gloss to the putrid contours of the hole-existence.

An elderly couple, my neighbours, lived in a hole. Their sons and daughter were all established, lived in Bangalore and Delhi, working in multinationals. They earned huge money. The coupled lived all alone, and they loved it. They liked neither children nor neighbours. The man and woman all day lived in the hole. Only for an hour in afternoon they shut the hole ,and walked in the dust and smoke. Then they returned immediately to their hole and shut it. The night was cool, and they admired it both. Such degeneration of human beings was not exceptional. This beautiful life of hole neither deadened the soul and body, nor enlivened them. They gathered food somehow not like the primitive hunters. They were modern crums gatherers. And they loved hole perfect. No grudge, no blame game, no pain, no happiness, no desire, no more demands on earth. Only the remaining days to be penned in a hole. And breath a life’s perennial bliss in a cage, modern and sophisticated.

The lure of hole is too irresistible. Like me many others from the four corners of the hole came here in search of a “higher” life. All left their ancestral lands and homes, friends and relatives and neighbours.

They left tipsy villages, checkered with ponds, grazing fields, broad paths, wide skies , dark nights, shiny days. Bereft of all ties, the former villagers, now city dwellers, all lived in their holes peace and quiet. In old days known, half known and even unknown relatives stayed in their homes days and months. Now the closest friends and relatives are hesitatingly welcomed for a cup of tea in the hole. Our children had ten tutors, and the lone child of each hole was inhumanly pressurized by educated parents. Their faces dried all. They had a peculiarly vacant look. The life of hole with its putrid drains, polluted air, footpaths encroached, dadagiri of the jobless youths, traffic jams, cheating traders, stale fish and frozen meat, mall consumers, dishonest doctors,lawyers,police, sponsored arrays of festivities religious and secular, processions of parties, known and unknown organisations and ngos, is really pleasant and smooth and beautiful!